It’s not often I buy chicken to eat in the cinema. In fact, this may have been the first time. Chicken and bread, plus a can of coke – must be the Chilean in me. Dredd with fellow Issues podcasters Danny Drive Thru and DJ A-UP, anyway, was a top film. I think we all probably had reservations at first, but the buzz started on Twitter around release date and I ended up dead excited to see it play out. 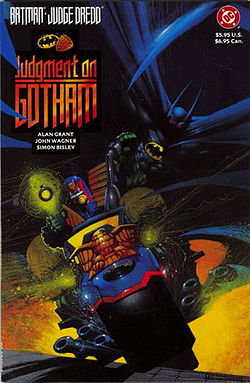 I’ll be honest, I always read Eagle (the Eighties relaunch) more than anything else in terms of British comics when I was young. I’m not sure how long the shadow of 2000AD cast itself over this comic’s publication during its run, but I’m sure it was quite far. I dipped into 2000AD here and there but had never stayed with it. This summer I remedied that and grabbed The Cursed Earth and a few other stories in one of the Judge Dredd Case Files that Rebellion publish, and was really pleased at the pitch, art and humour of the stories (Brian Bolland always having been a particularly favourite artist of mine since I first read The Killing Joke around ’89). I picked up Judgement in Gotham upon its release (and looking at the US vs UK covers now notice the spelling of Judgment/Judgement, which I had never noticed ’til it looked weird on the Dredd trailer), which absolutely kicked my arse, and the similarities between Batman and Dredd were hilarious.

So, back to the movie itself. I still haven’t seen the Stallone Dredd and it’s sort of a shame that the general public’s view of the new one is tainted by the other’s reputation. There’s an associate in Manchester who had an extra role in the old one, and he mentioned that Stallone was a bit of a dick on set which doubly put me off. I like to think he’s mellowed with age now in the spirit of answering fan questions on Ain’t It Cool and The Expendables.

I digress. The typography in Dredd hits you straight away, with clever use of 3D bringing you right into the opening action sequence. A guy with headphones – what’s he listening to? Who makes headphones in Mega City One? Meh, his head’s exploded. Time to finish the squelchy chicken, sharpish. 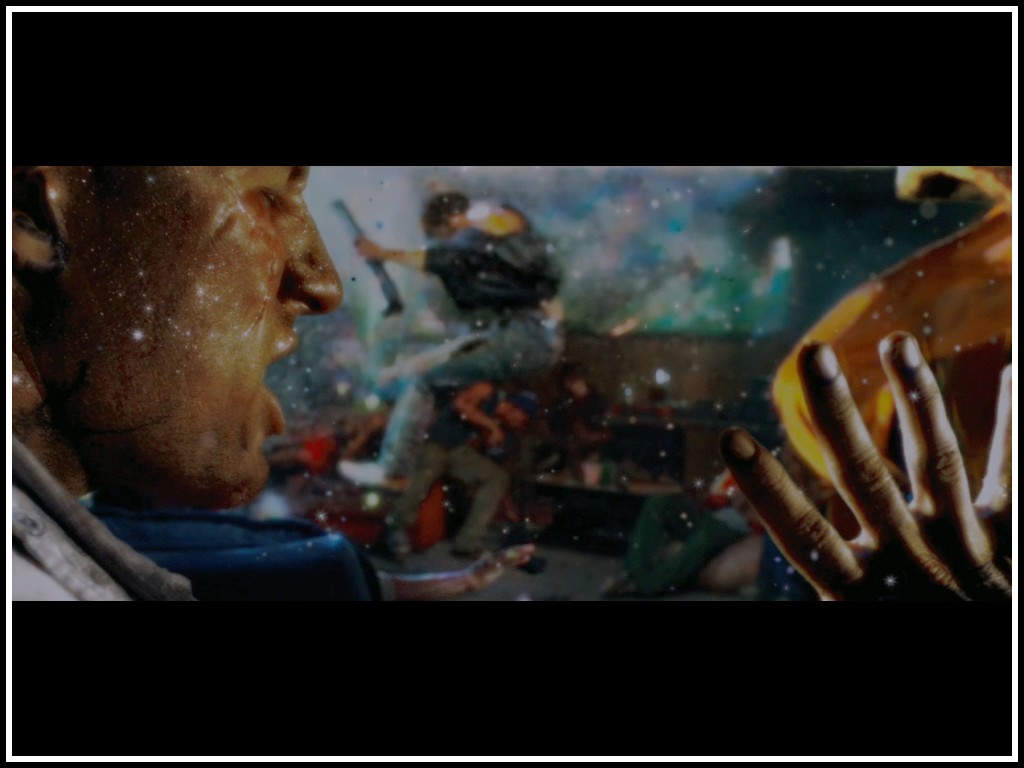 The 'Slo-Mo' scenes are played with an air of vibrant otherworldliness that overpower any cheesy Matrix-style allusions.

The soundtrack throughout the move is all killer, making great use of cinema subs and big thuds (must remember to pick up Geoff Barrow and Ben Salisbury’s Drokk to compare to the OST). The trailer had picked out a few cheesy lines of Anderson’s (it’s to be expected with Joe himself) so I was a little worried about the script, but even though the plot’s simple the dialogue is pretty much pitch perfect for a 2000AD movie – I must find out if Alex Garland was always a fan (although it’s more likely the ‘unorthodox collaborative process‘ ensured the correct flavour throughout rather than any one individual). Dredd’s one liners and gruff retorts are ace, and the funniest bits.

I find it hard to reconcile Karl Urban’s McCoy in the new Star Trek with his portrayal of Dredd as Leonard is such a nice man. But hey, he’s an actor so he makes me believe, with only his chin. He’s the unstoppable force (I wanted to say heart and soul) and the immovable object here. Olivia Thirlby has conviction and dark undercurrents to her Anderson which deepen her character significantly from the rookie status she holds in the narrative (nice bit: the Chief Judge stopping Anderson delving any deeper in Dredd’s psyche and thus saving him from Hollywoodisation). 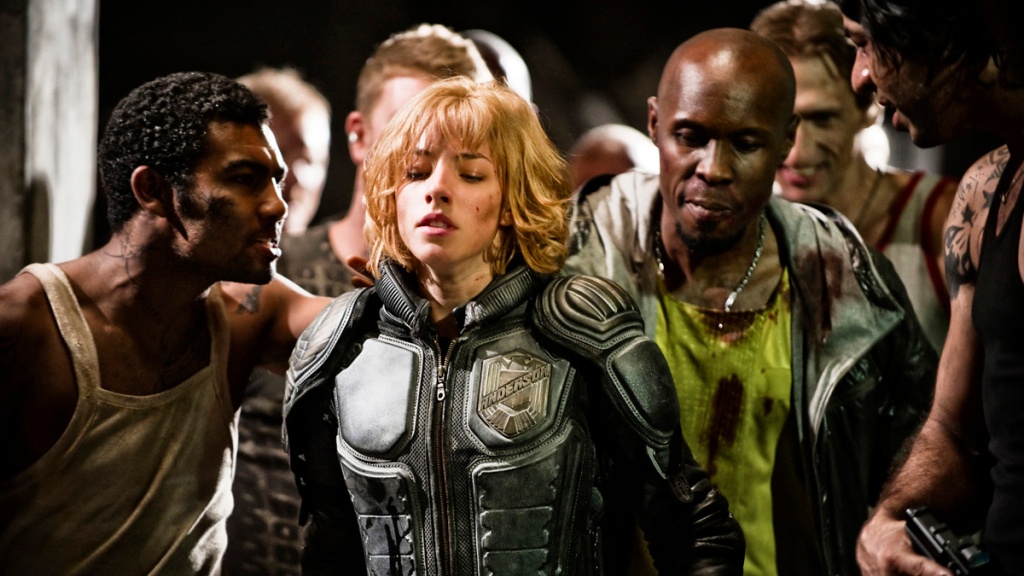 No turning back. Olivia Thirlby, Wood Harris and pals.

I actually found Lena Headey’s Ma-Ma quite a sympathetic villain, played subtly but perhaps not menacing enough, perhaps a tribute to her calm psychoticness. Wood Harris (The Wire’s Avon Barksdale) has a good go with what the script serves him (mainly being dragged around by the judges) and I sort of felt happy that his character had a bit of a turn around three quarters of the way through.

Massive shout to the director of photography, Anthony Dod Mantle, who brings an inherent otherworldliness to the slo-mo sequences without overplaying them in a Matrix-stylee. Perfect for 3D really, so I’m glad I saw it on el screeno bigo.

Dredd’s a chunky, well-paced and visually satisfying couple of hours. Mega City One’s not too Blade Runnery, the tower block not overly claustrophobic, the dialogue clever enough. Looking forward to the sequel immensely.

Now, I can watch The Raid.

Footnote: The poster up top is based on the second page of Judge Dredd: America if anyone (Drive Thru) finds it familiar. Thanks to the 2000AD Tweet Droid. 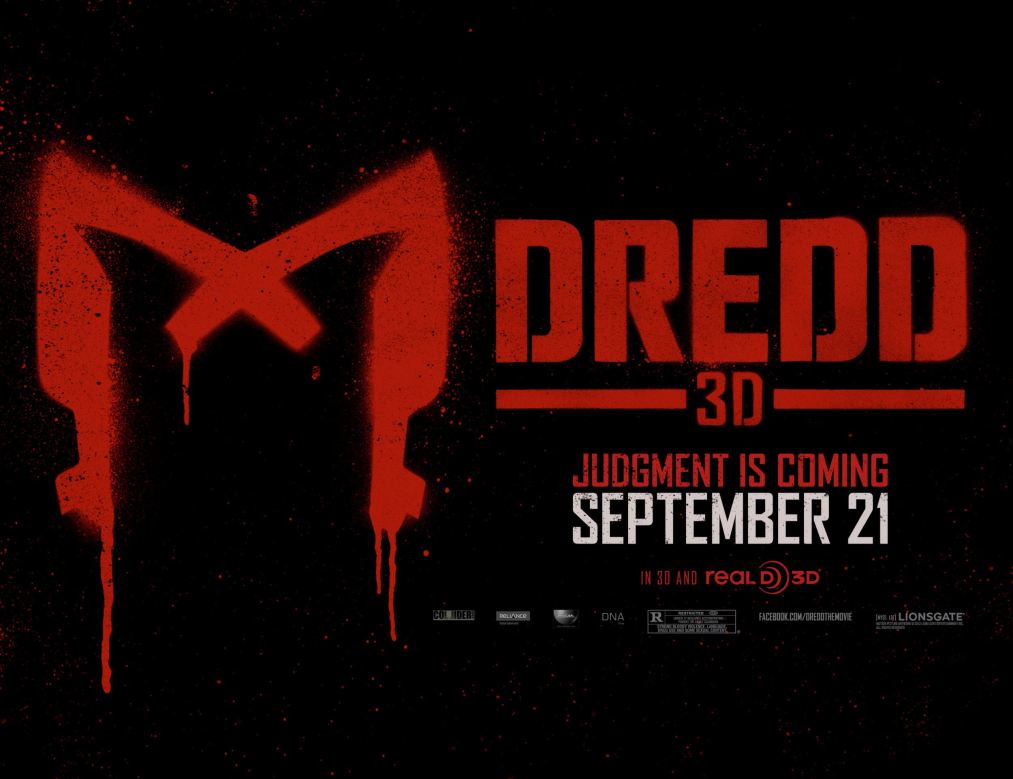