The soundtrack to the 1990 Teenage Mutant Ninja Turtles soundtrack was synthy, funky and downright cool – when I was ten.

I remember going to Woolworths on a Saturday morning to get the Partners In Kryme single, despite an overwhelming urge to boycott the duo owing to their ignorance of the real leader of the group. This was quickly superseded by wonder at the single cover opening out into a fold-out poster, and the realisation that the B-side included not one, but two tracks from Splinter himself. Happy with my purchase and brandishing my pound (singles were 99p, but you got a POSTER!), I carefully chose one from the display pile (not the top one, obviously) and made my way to the counter then on to breakfast and chocolate cake with my dad. 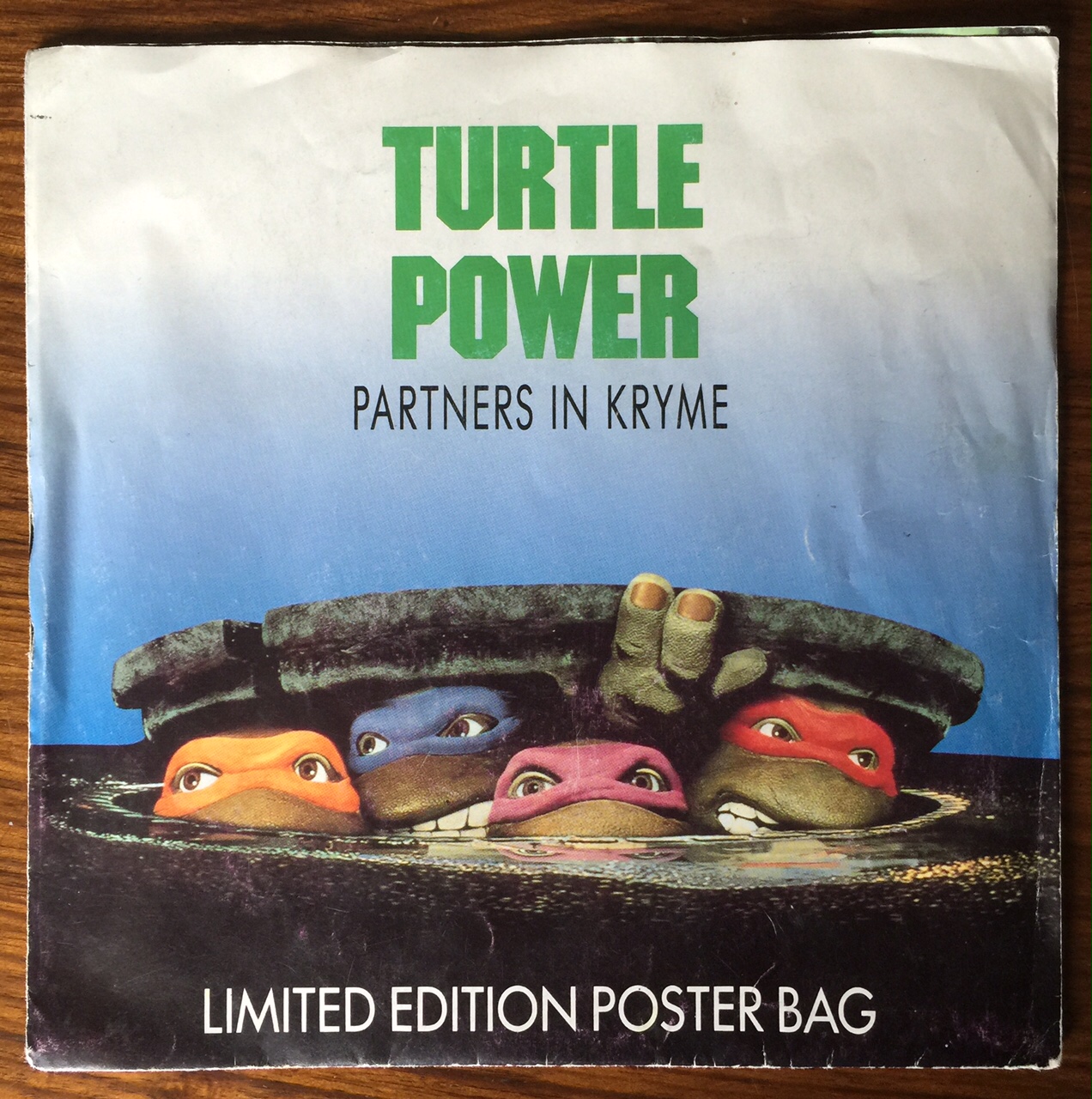 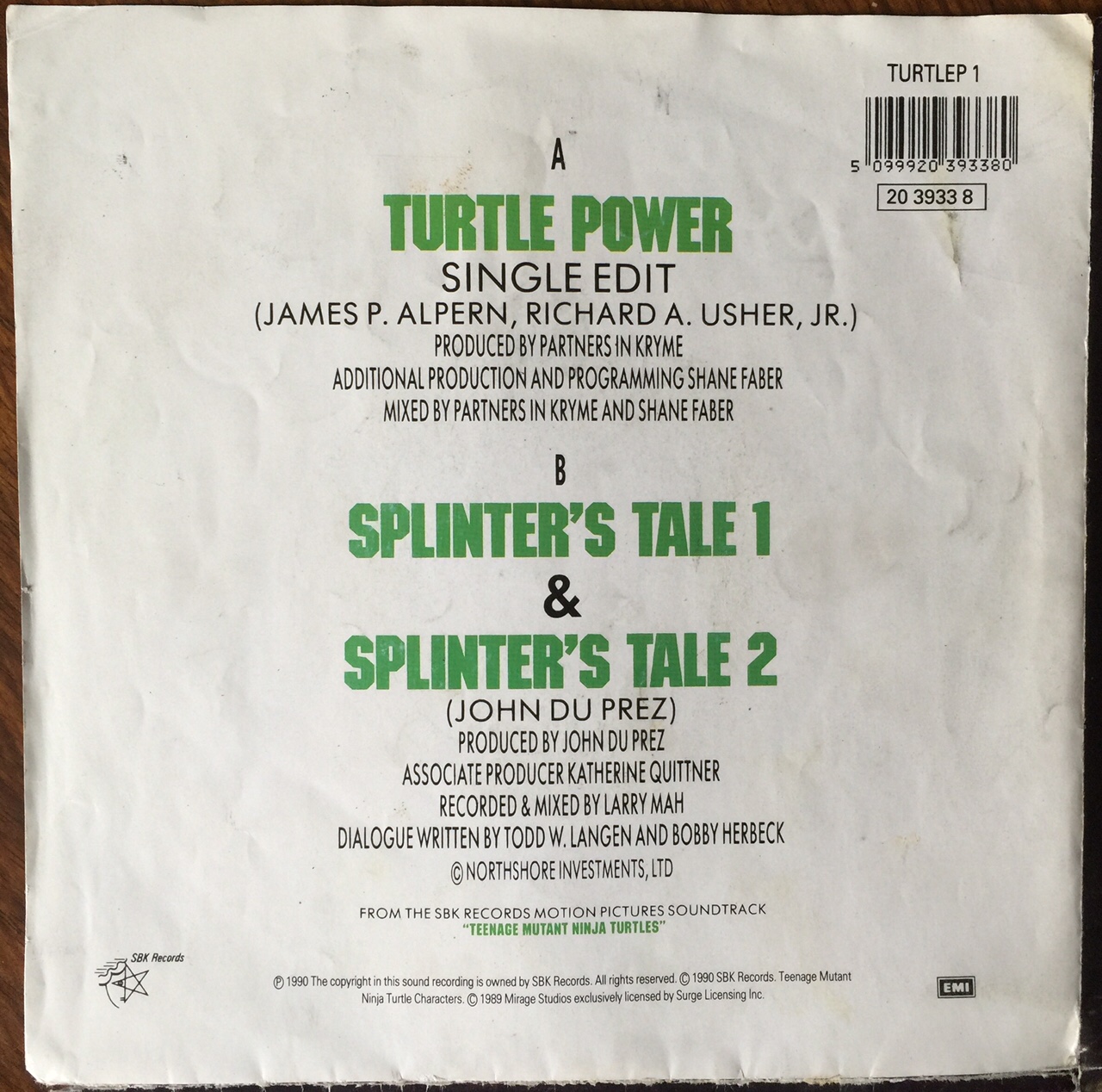 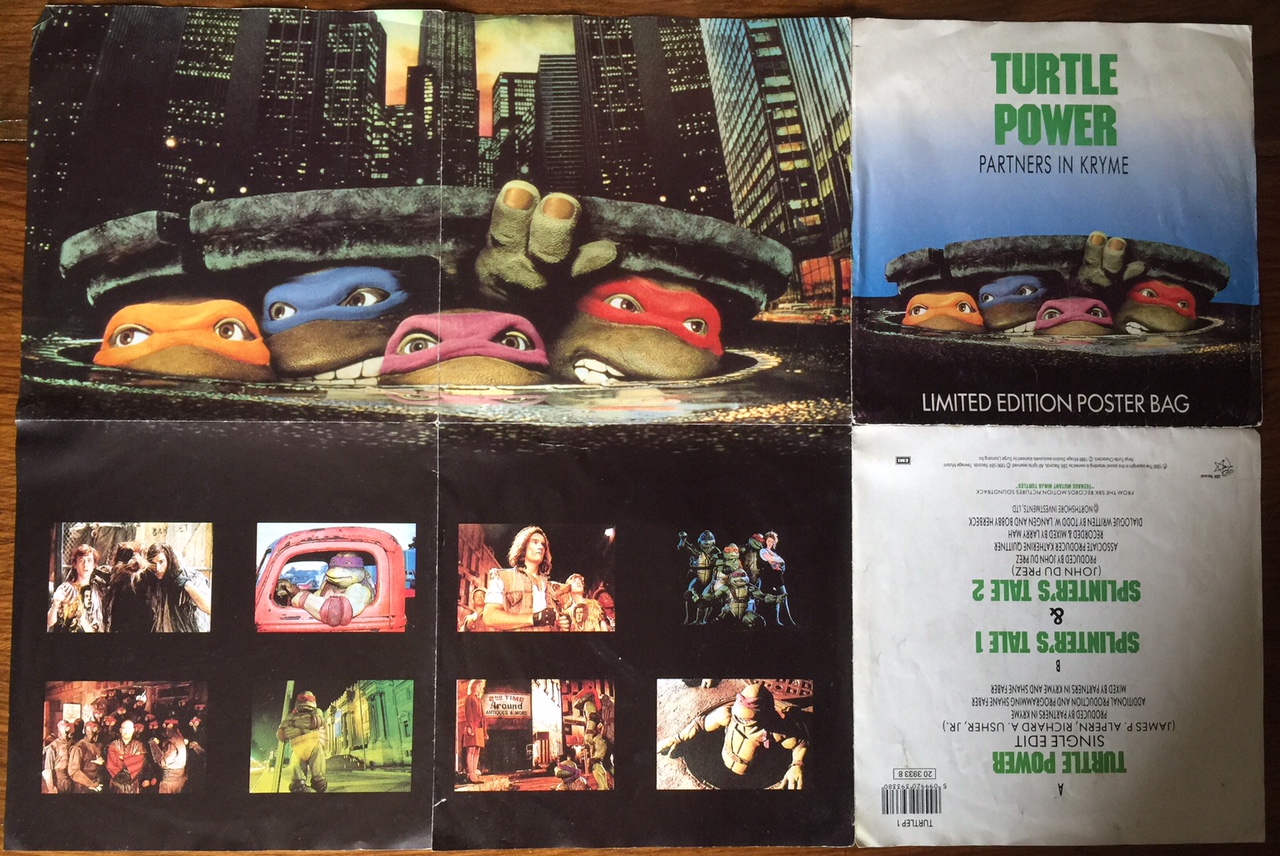 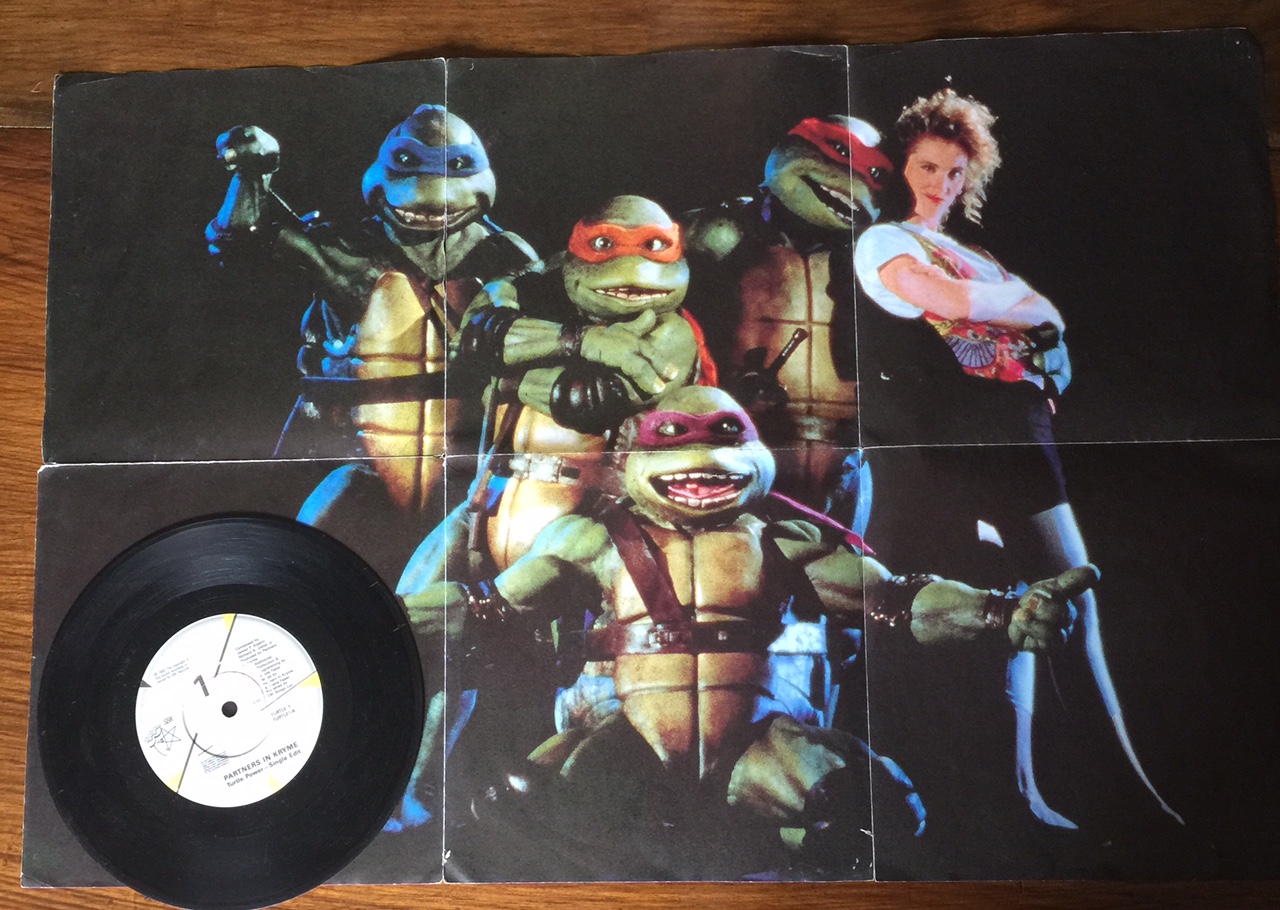 It was a year earlier that I’d started to get heavily into the original Mirage comics, and the film taking its lead from those first twelve issues was very encouraging for a young mind (IDW have those collected in ‘Ultimate’ versions here, but this from 1990 with the A C Farley cover was my jam). The fact that we were getting actual Ninja Turtles and not the watered-down UK ‘Hero’ version was exciting enough, but I nearly exploded when a friend brought round a pirate VHS of the film complete with terrible sound and picture, but vitally including Mikey’s nunchaku scene that I was pretty sure the BBFC were going to delete. Kids around the corner were swinging proper nunchaku out of the back of martial arts mags around their heads, but you couldn’t get that action on the cartoon.

Partners In Kryme dominated the charts and I taped the video every day from The Power Station chart rundown, BSB’s (pre-Sky) music channel, just in case I could get a little bit more footage from the beginning and end than the day before. Would you believe it took the lyrics inside the album for me to figure out exactly what the robot voice on the chorus was saying? 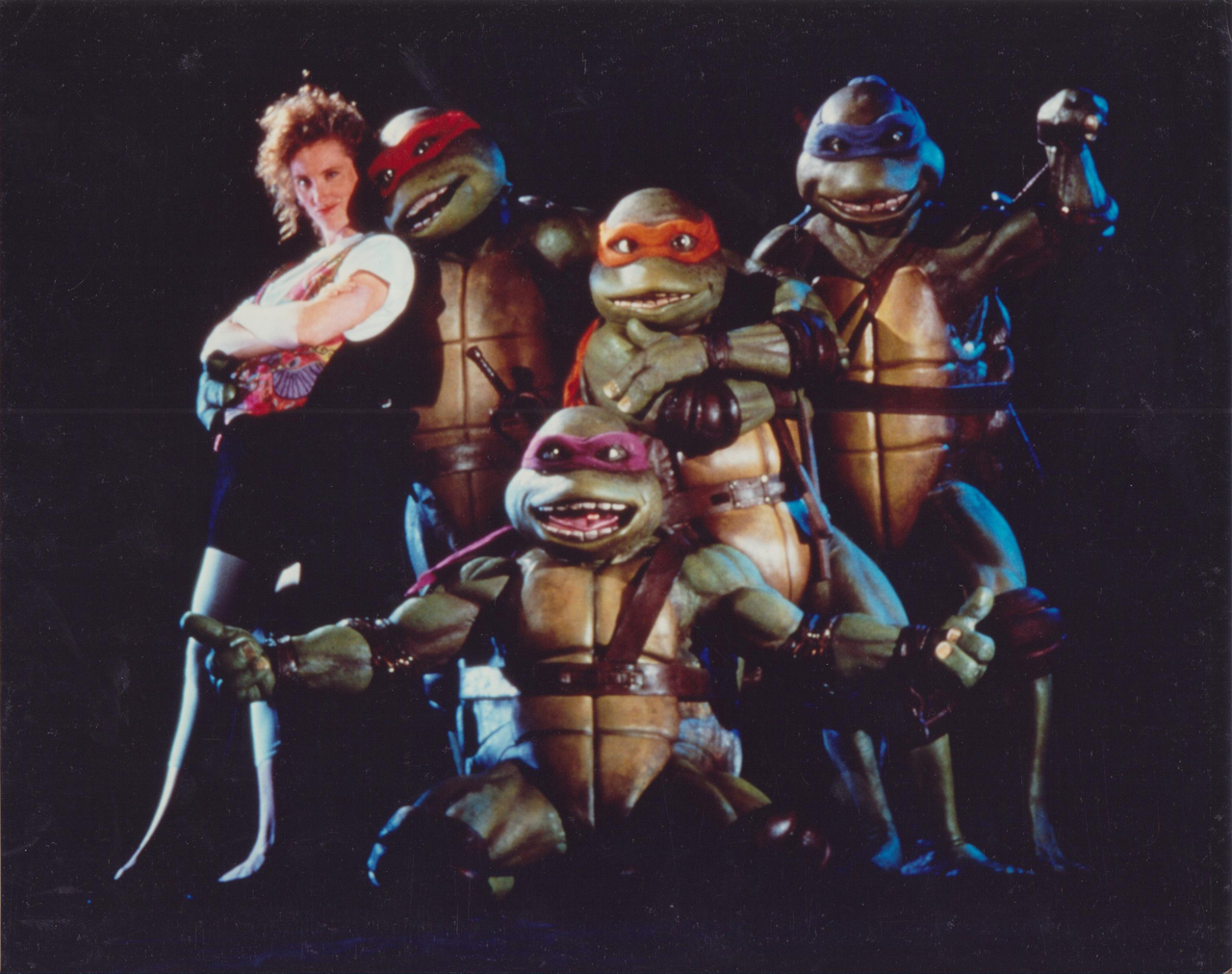 With no friends, and no phone.

The second single was, of course, Hi Tek 3 featuring Ya Kid K – Spin That Wheel (Turtles Get Real), in which the Foot Clan burst into a cinema and slapped around popcorn while YKK rapped at the front. 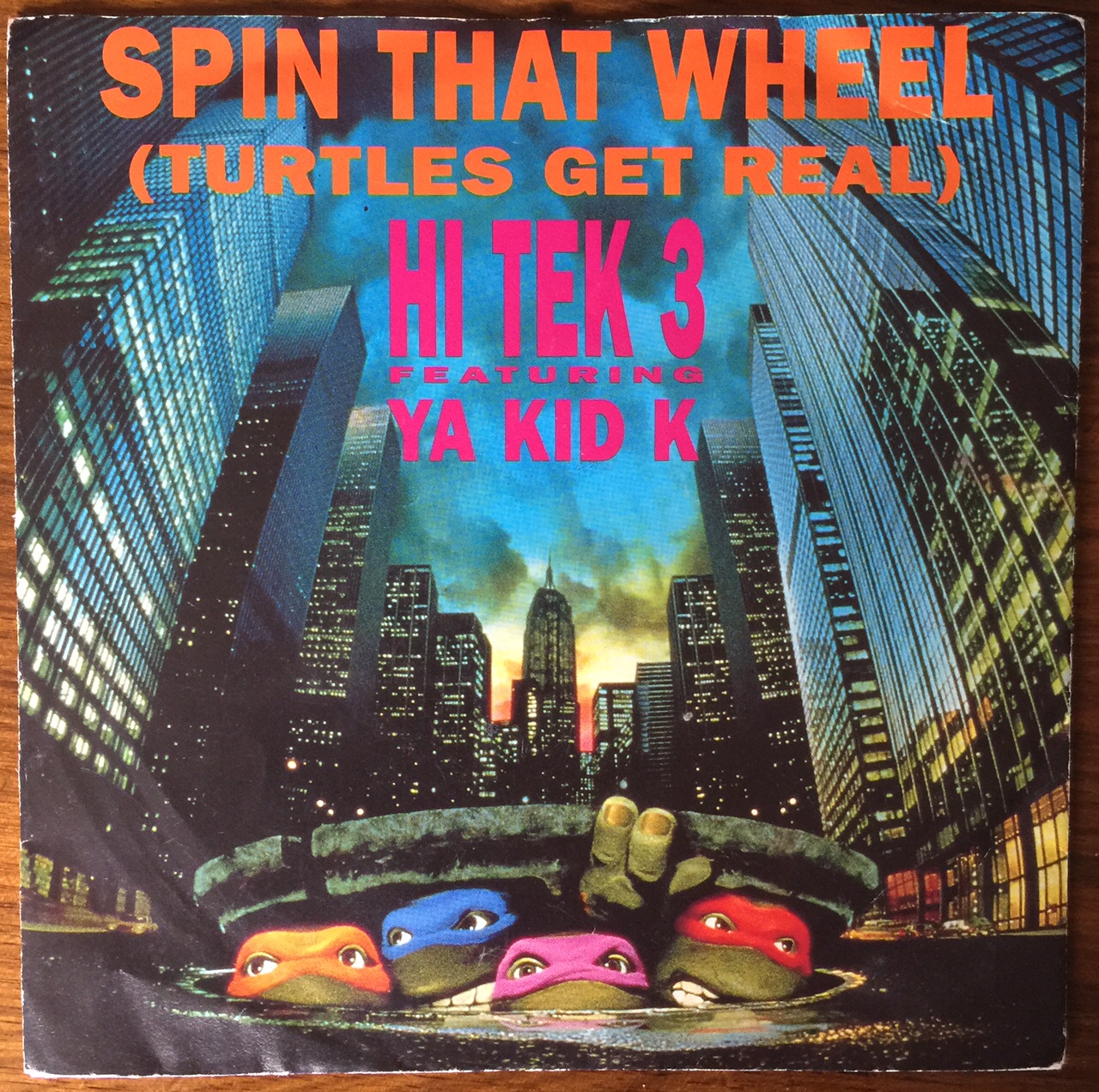 It was around this time that the album came out.

The only CD I owned at this time was Danny Elfman’s score to Batman (for £14.99!), and not yet being convinced about the financial viability of this format I bought the TMNT album on cassette for on-the-go listening.

This was the track listing, and you can skip through tracks on the video below.

Want to sing/rap along? Someone scanned the inside cover here and here.

Hammer’s opener was a storming call to arms, used (I think?) in the warehouse scene showing the kids packing boxes while Toshishiro Obata’s Tetsu grunted over them before killing/not killing one of them.

There are a couple of 80s-into-90s RnB stompers on this album, and Family was one of them. Who knows why Spunkadelic didn’t make it big with that name, but 9.95 was my favourite track on the album and got rewind after rewind (literally, being a tape). Dan Hartman, who co-wrote the track, was behind the O.G. Relight My Fire and Ride On Time.

Let The Walls Come Down was one of the weaker tracks (stop laughing) but had a nice sentiment, and led into the similarly schmaltzy Every Heart. These two got fast forwarded every time.

Things got orchestral with Shredder’s version of the Imperial March, Shredder’s Suite – a doom laden, badass score for a major threat from composer John Du Prez. In this film, Saki was actually a character with motive rather than a shoehorned-in robot (hello, 2014 movie). Pure narrative bliss was entered into with the joyful Splinter’s Tale I and more serene part II, with Kevin Clash emoting as only a giant rat could.

Turtle Rhapsody essentially spoils the whole album so it’s best to ignore that one (‘Awesome!’).

I’m not sure where my original copy of the cassette went, but a couple of years back my good friend DJ A-UP bought me the vinyl picture disc of the album so I can relive 9.95 whenever I want. And Shredder’s Suite… the rest of the album, not so much. 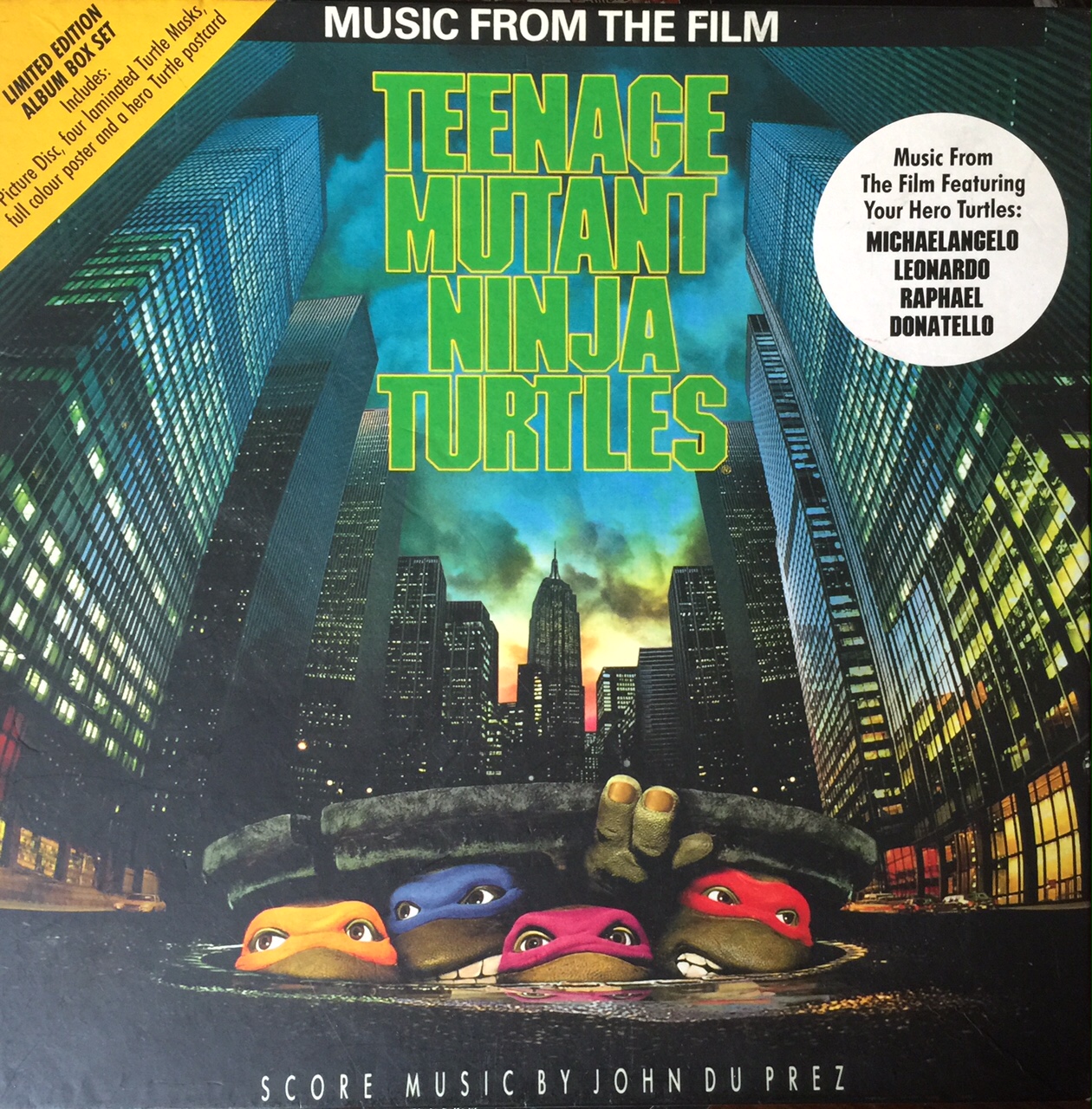 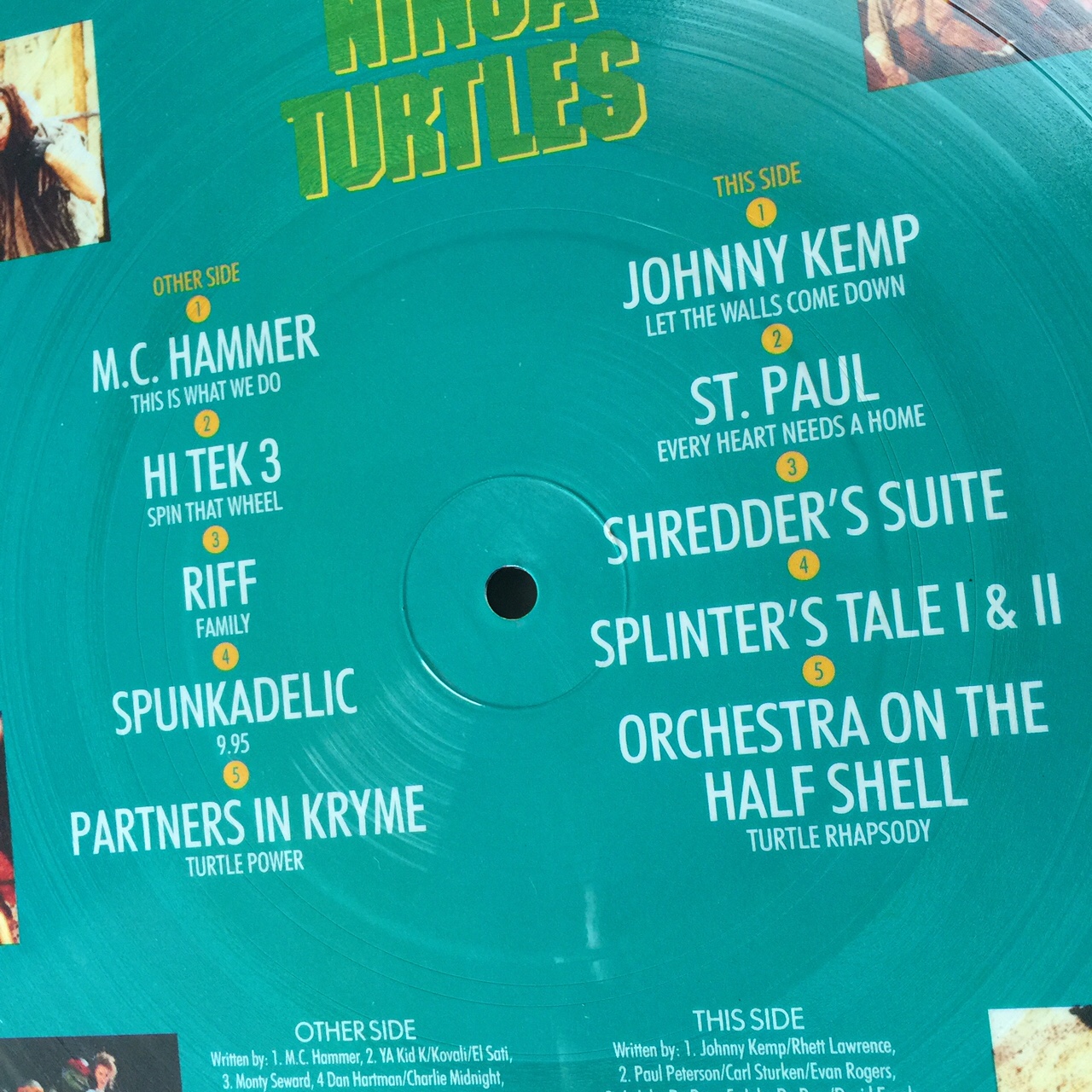 As far as I’m concerned, the most recent movie can’t even compare in terms of soundtrack. Do one, Juicy J, Wiz Khalifa and Ty Dolla $ign.