There’s not much more I can add to the net scuttlebutt already doing the rounds – they are huge, they do have nostrils and those lips are unsettling.

Watch the trailer in HD below. 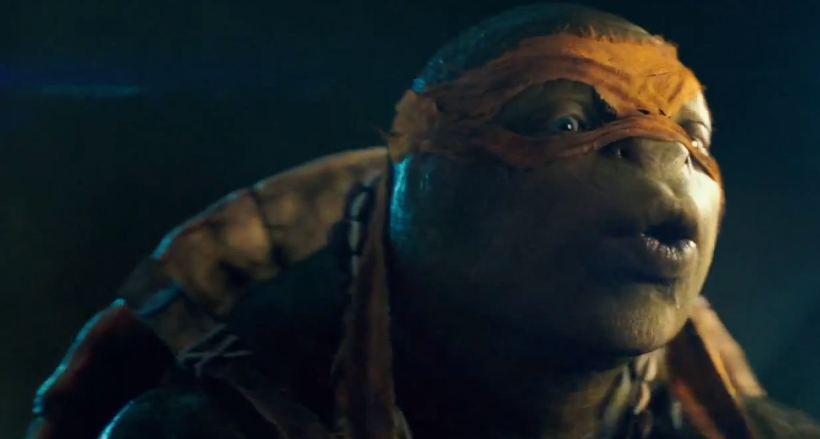 Discovering the April’s father seems to have had a hand in the creation of the turtles isn’t a far cry from plotlines developing in the current IDW series, which is a good 30 issues in. In that, a sneaky bit of mutagen from Stockgen, who April’s father used to work for, has just given him back the use of his legs – and his history with the creation of the ooze seems to be personal.

IDW have done a bang up job of mixing up various past iterations of the TMNT, and combining these with brand new characters, to create a fast-developing and fairly logical world with some weighty storylines (Fugitoid’s moral dilemma about Stockman, Krang’s ongoing struggle to gain respect from his father in the past, the history of the Foot, Leo’s turning to the darkside, the whole reincarnation thing – hell, even an explained transition from red bandanas to multi-coloured). Kevin Eastman is integral to that series (Peter Laird stepped back a few years ago, but with his recent Eastman cover collab for a 30th anniversary issue and rumblings that he may conclude the never-finished volume 4 soon, I hope his involvement increases despite his supposed disinterest in the IDW-verse [and I’m with him on some things… reprinting the Image run is surely a no-no!]). The IDW TMNT-verse is quickly developing a rich and detailed legacy of its own.

The movie has Eastman onboard as script consultant and I trust him to do the material justice. The whole debacle about them being aliens was probably related to TCRI bring of alien origin, as it always has been – whether or not this means April’s dad is an Utrom remains to be seen.  In fact, if the rumours of Shredder being an Utrom hold true, then that’s pretty likely? That’s only just occurred to me. Would that make April herself a creation of the ooze? After all, volume 4 of the original run revealed that April was nothing more than a drawing brought to life by Kirby’s crystal pen… Despite Shredder being white, the trailer sees him in a room with traditional Japanese decor – I’m not quite sure if this makes up for that, but it points towards some sort of connection with feudal Japan… hopefully.

Leo seems to be a good 7ft, and has a little NYC badge on his shoulder.

My hopes are kind of high for now – I’m willing to accept some sort of dumbing down, but parallels must be drawn with what Bay did with Transformers. Some amazing moments, but fleeting – sacrificed for drawn out non-bot narrative and too-fast-for-my-eyes blaring ‘action’. I pray the movements of these guys are shit hot, at least.