What if RUN DMC never happened? 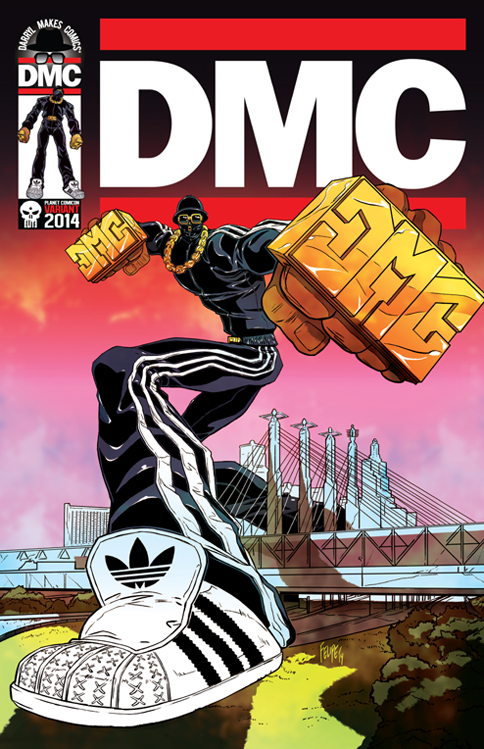 A variant of the con-exclusive zero issue.

DMC is about ready to unleash his graphic imprint, Daryl Makes Comics, upon the world.

The first release will be DMC #1, documenting an alternative 1980s where superhero DMC, rather than picking up a mic, dons his Adidas to ‘protect citizens from supervillain and superhero alike’. Taking the form of a longer graphic novel rather than single comic, have a gander at a preview here.

I love this quote from (the real life) DMC: Hip hop was always based on creativity. So what we’re trying to do with this comic book is not trying to create anything that’s new; we’re just going to show the world what’s already there… the beauty and the creativity of it.

Whereas Ghostface and Adrian Young’s recent foray into comics (Twelve Reasons To Die from Black Mask Studios, accompanying the sick album of the same name) was more of a dark horror-gangster tale, DMC’s take (with its superhero theme and whole imprint happening) seems more electric, colourful and dynamic.

Previews have a PDF sneak peak to download here.

Keep track of developments over at the DMC site and Daryl’s regularly updated Facebook page. 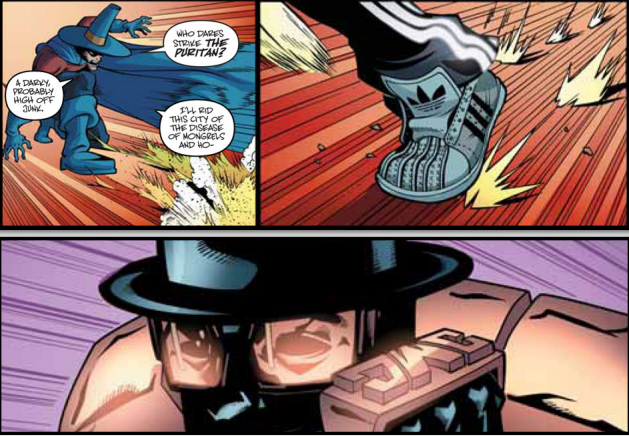 It’s 1985 in New York City. Wildstyle graffiti covers subway cars as. B-boys break and spin in playgrounds and on street corners. Koch is mayor. Drugs and crime rule the streets. A terrifying plague is brewing in the shadows. And as the populace loses faith in the police, a man named Bernard Goetz is being hailed as a hero for shooting four teenagers in a subway car.

In this 1985, however, the city’s brand new guardian angels wear spandex and capes, wielding their gadgets and their superpowers to clean up the City – even if their methods hurt more people than they help. There’s the deluded “graffiti king” Mr. Marx patrolling the tunnels; the dark moral crusader The Puritan who stalks the shadows of the Lower East Side; and above it all, the godlike Helios, darling of the Upper East Side and the NYPD. It seems like only some of New York’s residents are benefitting from these vigilantes’ protection. The rest whisper the name of another hero: DMC.

You see, in this 1985, Darryl McDaniels (Run DMC) never rocks the mic to become one of hip-hop’s most enduring icons. Instead, he dons his tracksuit and Adidas sneakers to defends the city’s marginalized citizens against super villain and super hero alike, leaving no traces besides the imprint of his knuckle rings on his opponents’ faces. (By day, though, he teaches junior high school English.) With the help of reporter Charlie Cooper and a band of graffiti artists led by the spunky Lak6, DMC must confront the new “heroes,” and investigate whether there’s anything behind their sudden appearance.

DMC, the inaugural title from Darryl Makes Comics, imagines an alternate history that blends traditional comic book storytelling with the pressures and anxieties of 1980’s NYC, and explores how we got to where we are now. DMC is a superhero for those who need one most.